Cobi N’Gai Jones, was born on June 16, 1970, in Detroit, Michigan. His career lasted from 1994 to 2007, starting from England with Coventry, before playing for Brazilian Vasco da Gama.

He was one of the most important players in the football history of America who came back from abroad in 1996 to help the then-new Major League Soccer (MLS) stand on its feet, starting an 11-year bout with Los Angeles Galaxy. He holds the record for most caps with US National Team and a member of the American Football Hall of Fame!

Jones had the nickname “Escobillón” (= swob!) due to the style of his hair and the similar pronunciation of his name, which was caught by an Argentine commentator in the 1995 Copa America, when he had become popular in Latin America!

Cobi grew up and played soccer with AYSO from the age of 5, at Westbury Village in Southern California. After graduating from the Gymnasium of the city, he emerged as a talented player at UCLA College as a non-scholar player to eventually develop into one of his most successful graduate soccer players! 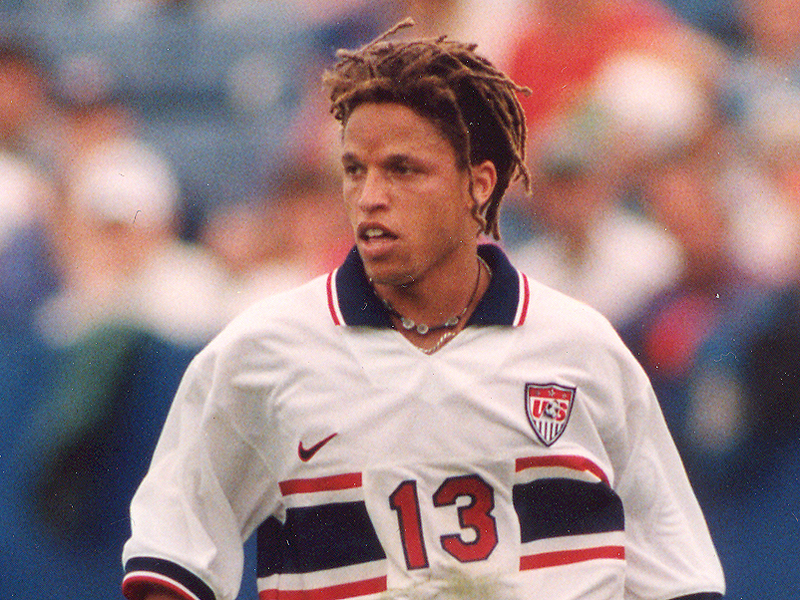 Following UCLA, he was a member of Lambda Chi Alpha (ΛΧΑ), an international charity with a strong Greek element in its statute. After joining the United States National Team in the 1994 World Cup held in his home country, he signed a one-year contract with English soccer club Coventry in the Premier League.

He made his debut on September 16, in a game against Leeds United. In this game, he had an assist and won a penalty kick, leading Coventry to a 2-0 victory. His first goal as a pro, won in November 1994 against Norwich. In one year, he managed to play in 28 games and score 9 goals in England.

After this season, he trained with German Cologne before joining Brazilian Vasco da Gama, after his impressive appearance with the US National Team in Copa America in 1995! After just six months in Brazil, he signed with the newly-founded Los Angeles Galaxy club for the opening season of Major League Soccer.

Jones with the LA Galaxy

Jones’ best year with LA Galaxy was in 1998 when they finished second in the MLS with 32 points, having 19 goals and 13 assists. He was named in the Ideal 11th Championship and was also named Best Player of the Year for the United States. In 2005, he became the last MLS player to remain with his original team since 1996! On March 19, 2007, he announced his withdrawal at the end of the season.

He played his last game with Galaxy on October 21, 2007. The club withdrew his shirt with No. 13, making it the first to retire in MLS history. Jones finished his career with Galaxy, having 306 caps and 70 goals.