Soccer players were always quite well known and in some cases, one might say, even famous. However, they were not always making too much money.

Some decades back, a soccer player was not a professional athlete, but someone who just played for the team of his town or his neighbourhood even. It goes without saying that the majority of the players had a regular full-time job, in order to cover their expenses and take care of their families. Soccer was just a hobby, something they would do on their free time and usually in the weekend.

Everything changed when television came. More and more games were on TV, more and more advertising.

Soccer was always a popular sport, especially in Europe, therefore the small and big companies saw an opportunity to advertise and raise awareness and sales of their products. The money started pouring in and the players were getting a piece of the pie as well.

Salaries were growing and growing and the good players didn’t have to work anymore, they could be professional soccer players and have more than enough to live on. This rise in salaries and advertising was working out pretty well and after some years, one didn’t even have to be the best of the best to make a living.

If we fast forward to the present day, this could sound like a joke.

The attention that follows large tournaments like the FIFA World Cup every 4 years steers up mind bugling earning figures. FIFA in 2014 for example had the potential to generate $23 billion in revenues from various forms of sources like TV ads, billboards, and sponsorship deals.

The budgets involved in preparing and hosting such large scale soccer competitions run into the billions of dollars and involve huge infrastructural projects including the construction of new stadiums, travel and touristic complexes and marketing campaigns. Football clubs and players get hefty cuts from these budgets in the form of licensing deals and sponsorships from brands who are featured on these championships. 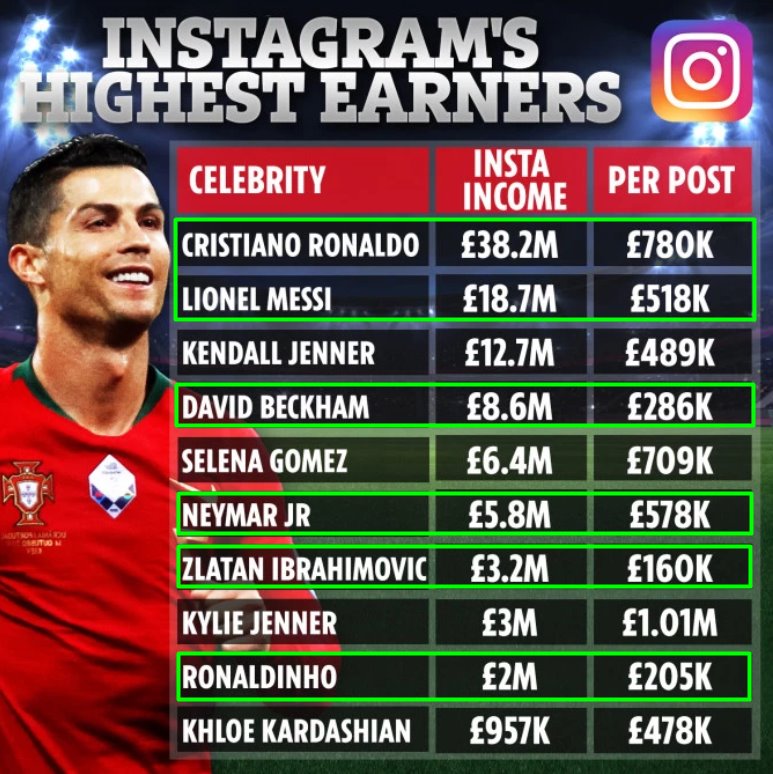 The salaries are huge, the signing fees are unreal

Even for a mediocre player (in the top leagues) one would have to pay a few million dollars in order to sign him. The amount of money that has flooded the popular leagues (and not only) has changed the game forever.

The Portuguese super-star, born in the small island of Madeira, has scored more than 600 goals (!) in his career, has won almost everything including the Champions League 5 times and the European Cup with his national team.

He’s one of the best players to ever play the game and he made sure to be compensated appropriately.

Except the huge salaries he’s receiving, he’s also made lucrative deals with several brands in order to advertise their products.

His total earnings for last year, according to report came to a staggering $109.000.000! Yes, 109 million dollars, you read that correctly. Reportedly, he makes an estimated $47.8 million per year only from paid-Instagram posts blasting social media shares to 193 million followers.

The five-time Ballon d’or/Best FIFA Men’s Player winner, is a genius when it comes to monetisation and the numbers can prove it. His 192.7 million followers on Instagram give him the opportunity to charge as much as $900.000 per paid post.

As of 2019, Cristiano Ronaldo’s net worth is roughly $450 million. Additionally, he has signed a life-time contract with Nike (his biggest sponsor) worth 1 billion dollars!

Ronaldo is known for charity work as well, having helped many with his fortune (and himself with the tax-break).

The Argentinean super-star of Barcelona is an absolute pleasure to watch, his left foot has kept soccer fans on their toes since he introduced himself back in 2004.

He has won the Ballon d’or a record six times, more than any other player in the history.

Despite playing all his life in Barcelona (therefore not getting any signing fees), Messi has earned millions of dollars in salaries, bonuses and endorsements. His total net-worth is estimated to $400 million, while he was reported to be the 2nd highest-paid athlete (of all sports) in the world for 2018.

Leo has 138.3 million followers on Instagram and has signed endorsement deals with big brands like Adidas (a lifelong deal), Huawei, Ooredoo, Lay’s, Gatorade, Mastercard, Pepsi and others.

Furthermore, he recently launched his own fashion / clothing brand, with its range of t-shirts, sweatshirts, polo shirts and trousers.

His transfer from Barcelona to the Paris Saint-Germain in 2017 was the most expensive player club move in the history of soccer and cost a whopping $263 million (€232.5 million). This crazy transfer cost and his agreed annual salary of $53 million (€45 million) makes the Brazilian football star the world’s highest-paid soccer player.

He also makes a cool $30 million from various brand endorsements, with major companies like Gillette, L’Oreal, Panasonic, Red Bull, Beats by Dre (an Apple company), McDonald’s, Nike. Neymar was featured in numerous TV ads of mentioned brands as well as Volkswagen, Santander, Unilever. So no surprise that he was named “Most Marketable Athlete” by Eurosport.

It’s not uncommon that famous soccer stars also endorse gambling brands – who by the way also willing to pay generously for the exposure to millions of fans. This activity often creates controversy in the media – especially around expressing concerns about the younger generation who follow these superstar footballers.

Pokerstars were one of the brands in 2015 who engaged in a marketing campaign with Neymar and Ronaldo Nazário. First the #RaiseIt social media campaign by PokerStars where the two players were showing off various trick shots and other crazy stunts. This campaign got more than 20 million views and proved to be a hit with fans across the world. Later Neymar and Cristiano Ronaldo appeared in another campaign Team PokerStars “The Game” by PokerStars.

PokerStars is a reputable brand when in comes to the world of poker however it’s worth to do your own research on what poker sites are trustworthy. If you reside in the US you may want to research information about selected US poker sites where you can place your bets safely.

Another well-respected poker brand choice is 888 Poker – read a good review here – which is available in Nevada, Delaware, and New Jersey.

But why would soccer players in a poker game appeal to fans?

Well, the audience for a gaming brand is perfect – many football fans wager on the outcomes of the game. People who bet on soccer games likely to have a go at a poker round if they see their favorite athlete engaging in the same activity in the ads.

Poker is a game of skill they say, just like soccer and both games require strategic skills and perseverance to master.

C.Ronaldo said in an interview:
“Although football is my world, poker has always been my game… I started playing poker a few years ago, and I love the competition, strategy and fun. I’m looking forward to taking my game to the online and live poker tables and meeting my fans head to head.” 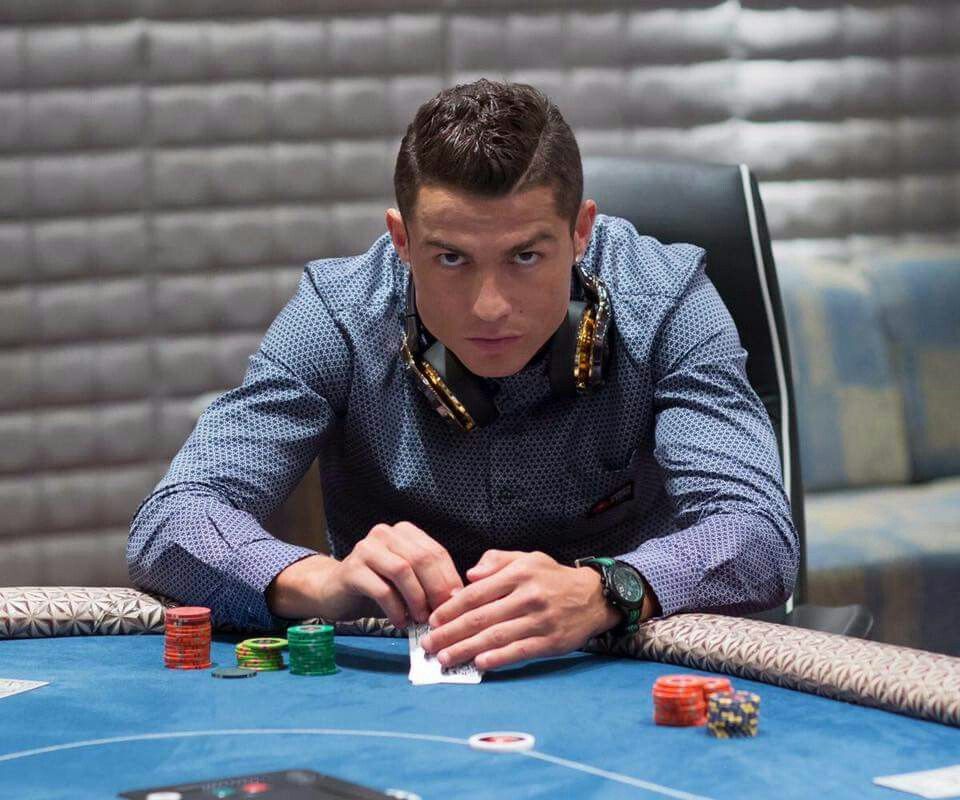 Neymar when asked about his relationship with poker stated:
“To be a successful poker player, you require many of the same skills needed to be a successful footballer — mental strength is important; resilience, patience, composure, and focus,” he said. “I love the challenge, whether it’s on the football pitch or at the poker table.” 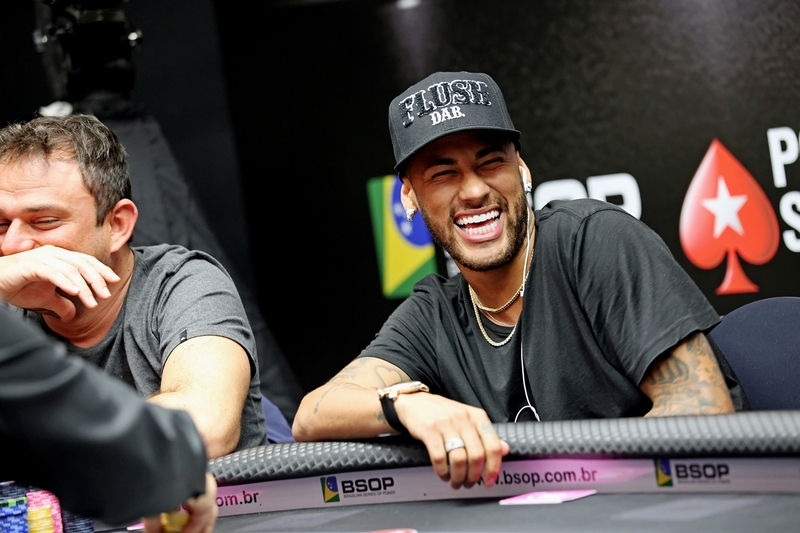 He is actually so big on poker that in a social media post he revealed that during PSG’s league-clinching match, he was playing online poker while he was recovering from a foot injury.