Megasoccer tries to shed light on some unknown aspects of a sport that was considered “unsuitable for women” in England in the 1920s.

The Irish dandy Oscar Wilde had once remarked that “soccer is a sport for lively girls and not for slender boys” and he would have known something more, since in his late 1890s and early 1900s women’s soccer in Britain was not is taken from … Mars and had a great reputation.Many times games between “ladies” gathered more than 50,000 fans, and much more than the corresponding men’s matches of that time, at the same time that in the 1920s England had more than 150 women’s soccer clubs.

However, around 1930 the English Federation decided that soccer was a sport “unsuitable for women”, while launching its ban and turning it into an athletic men’s avat.

In fact, it took more or less, more than half a century, for the women on the “island” to officially kick the “place” again, claiming sports equality from those who hold the soccer fortunes.

Women who stirred up the crowds

The first outbreak of women’s soccer occurred historically around the time of World War I, when women were called upon to work mainly in heavy industry and factories, when men had left to fight.

Women, in the absence of men, began to acquire male social habits, including sports activities and especially soccer, which at that time remained popular in the English bourgeoisie.

On Christmas Day 1917, on a different “Boxing Day”, more than 10,000 spectators will watch a women’s match in the Preston area. Three years later, on 1920s Boxing Day, Liverpool’s Goodison Park will be packed with 53,000 spectators who wanted to watch a game between the women of “St. Helen” and the “Dick Kerr’s Ladies”.

The “school” of Dick Kerr’s Ladies

The “Dick Kerr’s Ladies” women’s team was one of the most innovative and pioneering clubs in the mid-1910s, leaving a heavy legacy in English women’s soccer.

It took its name from the factory “Dick Kerr & Co” which produced ammunition in time of war, while it was the first women’s team that dared to wear shorts, but also to take part in competitions outside the English border.

The decision to create this team was reinforced by a victory of the team of “ladies” of this factory in October 1917 against the male workers, in a game that arose in the effort of the employer to decongest the potential from hard work and give incentives for extra work for employees, as production had been greatly reduced.

In the following years, when the team became somewhat official, the factory “Dick, Kerr & Co”, which gained fame through its women’s team, took care to pay each player, with ten shillings per game.

From the zenith to… nadir 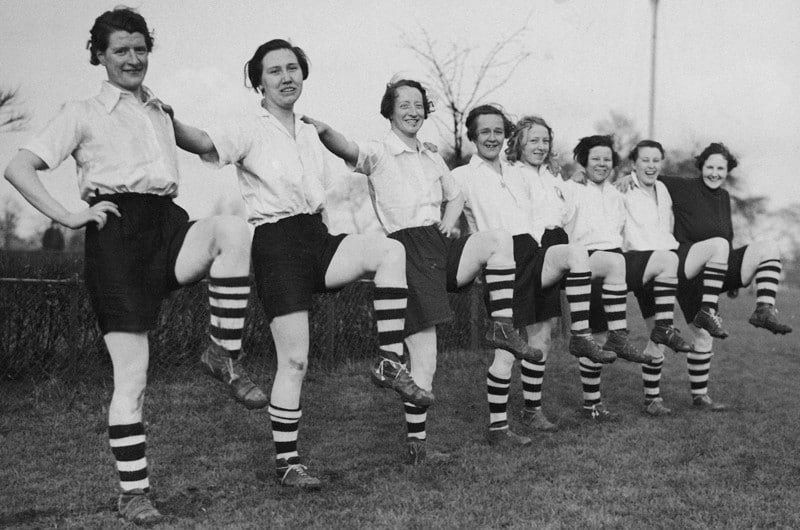 On December 5, 1921, the FA decided to put a final tombstone on women’s soccer, which was at its peak, banning women’s matches in a fixed position, effectively ousting women from stadiums and stadiums.

The specific decision of the English federation was based on the foundations of a highly chauvinistic view that considered soccer to be a sport only for men and that women’s participation should not be encouraged.

The course of women’s soccer history on the “island” will change almost half a century later. The Women’s Football Association (WFA) will be founded in 1971 to bring to the fore a sport that has always flowed in the veins of the female community in England.

The next few decades were to pave the way for the definitive return of women’s soccer to the forefront.

In 1997 the FA will change its attitude for good and, taking off its chauvinistic cloak, will present a plan for the development of women’s soccer.

In addition, the creation of the women’s “League” in 2011 will strengthen the prestige of the sport that is now flourishing and famous. In September 2014, statistics showed that in England more than 2.6 million girls are chasing a ball in academies and clubs, at the same time that last November in Wembley, more than 55,000 tickets were cut in the England-Germany match.

However, the moves by those in charge do not stop there. It is expected that by 2017, about 30 million pounds will be invested in order to strengthen the academies and give emphasis and weight to keeping the young girls within the four lines, in an effort to strengthen the view that women’s soccer has come to stay.