If you are a true soccer fan, playing high-adrenaline penalty shootout games on your Apple or Android smartphones and tablets can be the best way of engaging yourself in travel, commute or whenever you feel like.

There’s something about penalty shootouts that excites all of us. Call it the power of dram that unfolds one kick at a time, or the nervousness that engulfs everyone when the referee calls for a shootout, we all love shootouts dearly.

So, in the same spirit, we have brought top 5 soccer penalty games for iOS and Android that will keep you busy, and more importantly, EXCITED!

The Benefits of Soccer Penalty Games

Soccer penalty games are an excellent way to practice your skills before taking them onto the field in an official match. In fact, many professional players use penalty games as part of their training regiment. Penalty games provide players with an opportunity to practice basic techniques such as dribbling, passing, and shooting in a more focused, intense environment than regular training sessions. Additionally, penalty games can help players develop their decision-making skills by forcing them to think quickly about how best to score or prevent goals from being scored.

Penalty games are also great for developing teamwork and communication between teammates. As players must work together to create chances, they learn how best to communicate with each other on the field. Penalty games also give players opportunities to try out different strategies that can be used during actual matches, such as creating overlapping runs or making quick passes around defenders. Through these drills, players learn how best to use their individual strengths and weaknesses in order for the team as a whole to succeed.

Have Fun!
Above all else, soccer penalty games are simply fun! Whether you’re playing with friends or family members, it’s easy to get caught up in the excitement of trying to score or defend against goals being scored. Plus, there’s nothing quite like celebrating with your teammates after scoring a goal against your opponents! Soccer penalty games provide an opportunity for everyone—from beginners just learning the basics all the way up to advanced professionals—to enjoy playing soccer without having worry about the pressure of competing in an official match.

Overall, soccer penalty games offer many benefits for both experienced and novice players alike. Not only do they provide an opportunity for individuals to practice their skills in a competitive environment but they also give teams an opportunity for improved communication and teamwork on the field that can lead to better results during official matches. Best of all? They’re simply fun! So why not give soccer penalty games a try? You won’t regret it!

It’s no secret that soccer is one of the most popular sports in the world. Millions of people around the globe tune in to watch their favorite teams compete, and just as many people play the sport themselves. Given the popularity of soccer, it’s no surprise that there are a ton of mobile games available that let you get your fix of football fun. But with so many options to choose from, which ones are worth your time?

Here are our picks for the best mobile soccer games out there.

Whether you’re a diehard soccer fan or just someone who enjoys a good sports game every now and then, there’s no denying that mobile soccer games are a ton of fun. And with the COVID-19 pandemic still keeping many of us indoors, there’s never been a better time to dive into one (or all) of these five great options.

With the World Cup soon in full swing, there’s no better time to delve into the world of mobile soccer games. Here are a few of our favorites for iPhone and Android devices.

This is one of the most popular soccer games out there, with over 10 million downloads on Android alone. The game features more than 650 licensed teams, as well as real players that you can control. You can also create your own dream team by buying and selling players on the transfer market. If you’re a fan of the FIFA video game series, then you’ll definitely want to check out FIFA Mobile Soccer. This game lets you build and manage your own team of soccer stars,compete in tournaments and challenges, and even play through an entire season. Plus, with updated rosters and real-world events, you can be sure that FIFA Mobile Soccer always has something new and exciting to offer.

#2. Top Eleven Be a Football Manager

Another hugely popular option, with over 50 million downloads on Android. Top Eleven lets you take control of your own soccer team, managing everything from training to transfers to tactics. You can also compete against other players from all over the world in real-time matches.

PES Club Manager is a bit more focused on club management than actual gameplay, but it’s still a lot of fun. You’ll be responsible for things like building and developing your stadium, as well as signing new players and overseeing training sessions. You can also take your team online to compete against other clubs from around the world. PES 2020 is another great option for mobile soccer fans. In this game, you take on the role of club manager, responsible for everything from hiring staff to signing players. You can also compete against other clubs from all over the world in online matches. With PES 2020, you really get the full soccer club experience even when you’re on the go.

If you’re looking for something a bit more arcade-y, look no further than Football Strike. In this game, you’ll be tasked with scoring goals from all sorts of different angles and distances. There’s also a multiplayer mode that pits you against other players from all over the world in real-time matches.

Dream League Soccer is another solid option if you’re looking for an arcade-style football game. In addition to the usual array of dribbling and shooting challenges, Dream League Soccer also lets you build your own stadium and create your own teams of players. You can also compete against other teams online in real-time matches.

These are just a few of our favorite mobile soccer games. Whether you’re looking for a pick-up-and-play casual game or something with a little more depth, there’s sure to be a mobile soccer game out there for you. So grab your phone or tablet and start playing today!

And if you are happen to be a fan of older RETRO soccer games – we have a top 5 selection of that too: 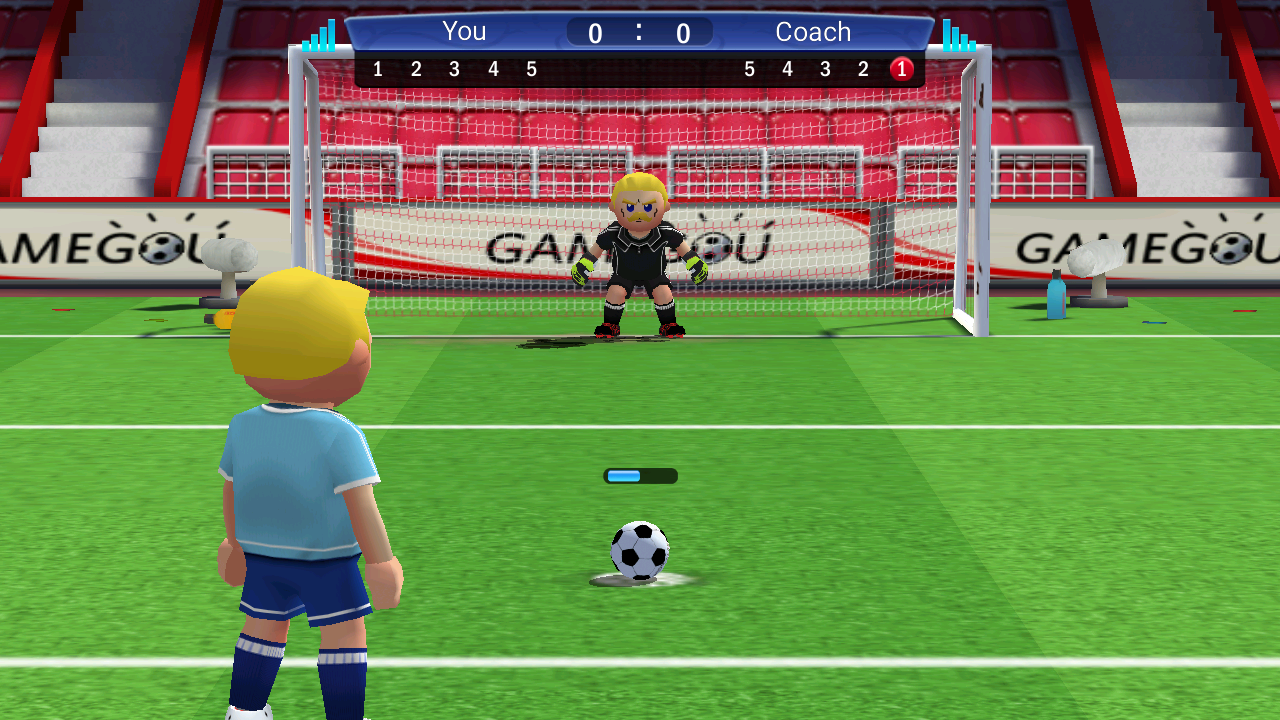 Perfect Kick is a simple yet addictive penalty shootout game. Developed by Gamegou and available for Android and iOS, the game is just what every soccer fan who loves a good penalty shootout needs.
Perfect Kick doesn’t offer you much customisation – but the advantage here is that as soon as you start the game, you are straight off to playing, without fussing about.

The game is all about finding that perfect combination of power, timing and placement, not to mention outsmarting the goalkeeper. You will have to be on your toes all the time because the game has developed an algorithm – in real time – to learn your preferences and habits. So, you can’t just keep scoring using the same tactics over and over again.

The Perfect Kick mobile penalty game is for everyone who likes to feel like a soccer star every once in a while. All you need to do is download the game, sit back and enjoy the glory! 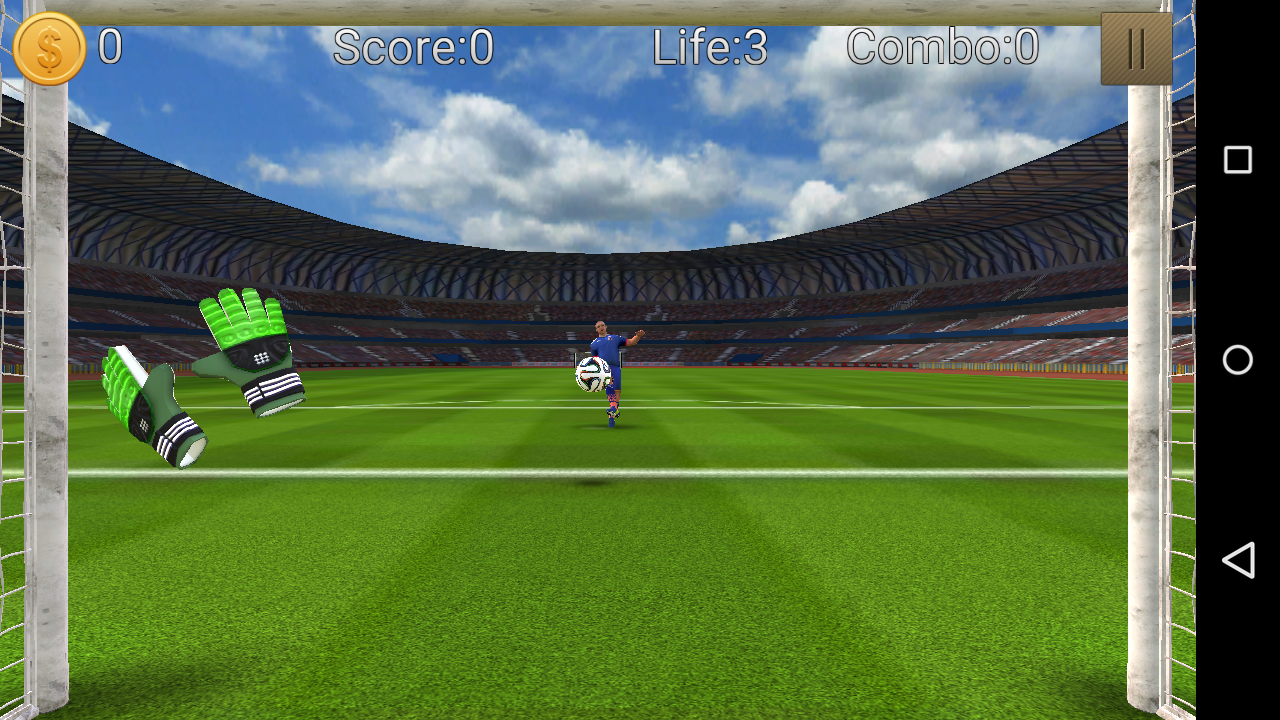 Penalty shootouts can produce some of the most memorable moments on the soccer field. From Zlatan’s incredibly forceful pile drivers to Pirlo’s artistically delicate chips and from Robben’s clever dabs to Ronaldo’s high flying top corner scorers, penalties have the power to transfix you to your seats and bite more than a few nails off.
However, little do we know about what the man who’s facing these shots feels like.

How does it really feel to have a ball kicked at you at such high speeds? What does it take to outwit a fierce striker like Rooney? How does one anticipate which way Messi is going to drive the ball past the goal line?

Well, now you can get a glimpse into a goalkeeper’s mind with Super Goalkeeper – a smartphone penalty game developed by Luandun Games, and available for iPhone and Android.

Read the striker’s mind, anticipate his moves and hurl yourself high and wide with only one aim of stopping the ball.
It’s more difficult than you probably think. Are you up for the challenge? 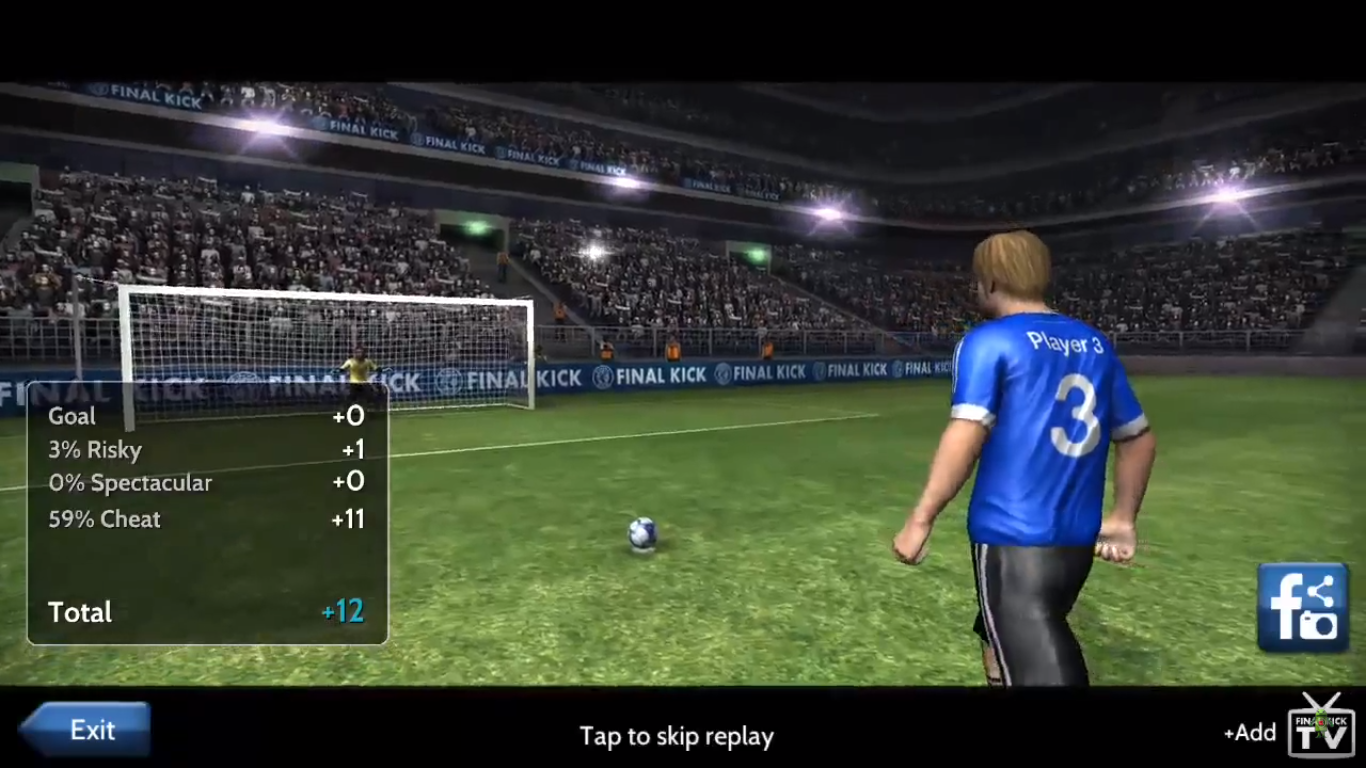 The game is currently available for iOS and Android for free, with an optional upgrade (player kits, stadia, player profiles etc.) available for purchase in the app. As you keep scoring or blocking goals, you will earn golden points that can be used to purchase various goodies from the official website of the developer.
So, it doesn’t matter where you are, you will always be carrying your passion for penalty shootouts right in your pocket. It would really not be a surprise if you stop missing your gaming consoles when you are on the go now! 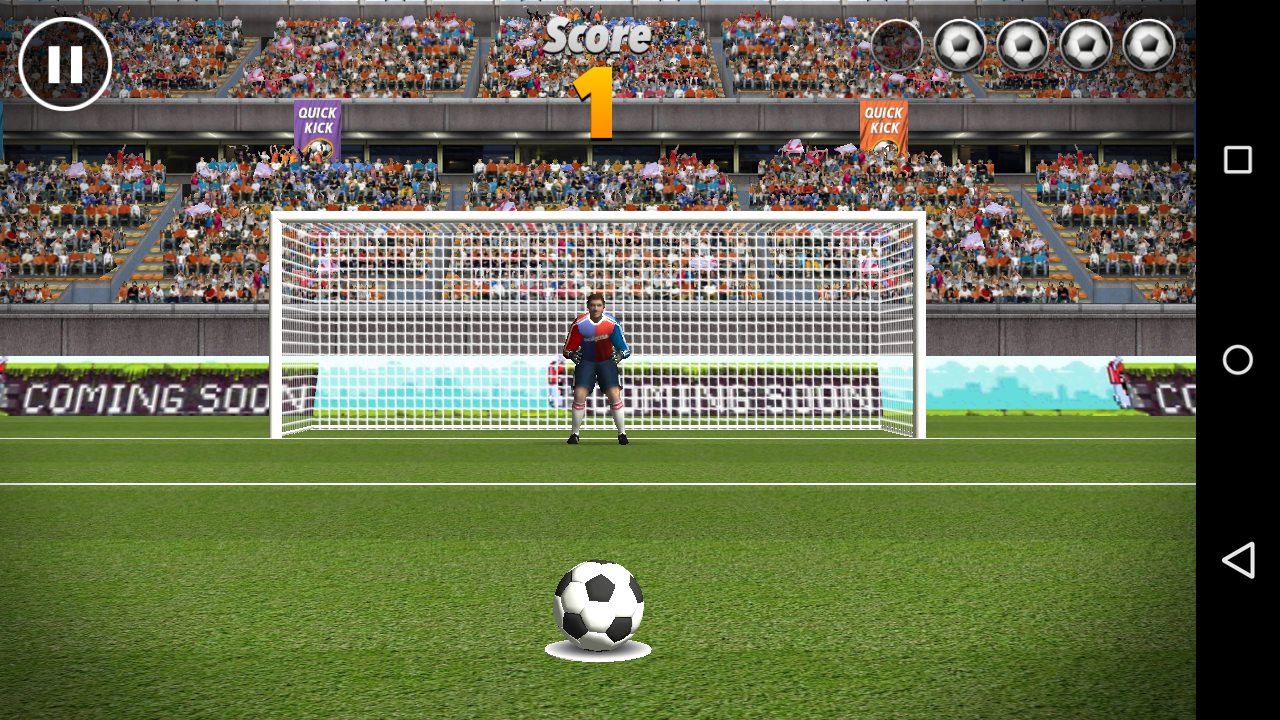 Although not really a brand new game, Quick Kick Brazil is still one of the most popular penalty shootout games for smartphones. It’s available for Android, iOS and can also be played directly via flash at the developer’s (DigitalMind) website.

What Quick Kick Brazil brings to you is a fairly simple but not simplistic experience of ultimate penalty shootouts. You can choose your teams, players and even score lines. You can simulate real life gaming experience with cheering and jeering crowd that will make you feel the pressure that penalty shootouts are known for.

Perhaps the only drawback that Quick Kick Brazil players might point out is the fact that the game is not really high on graphics. However, it also means that it’s small, nifty and won’t eat into your phone’s memory. It’s lightweight and can be played with ease whenever you want, however you want. 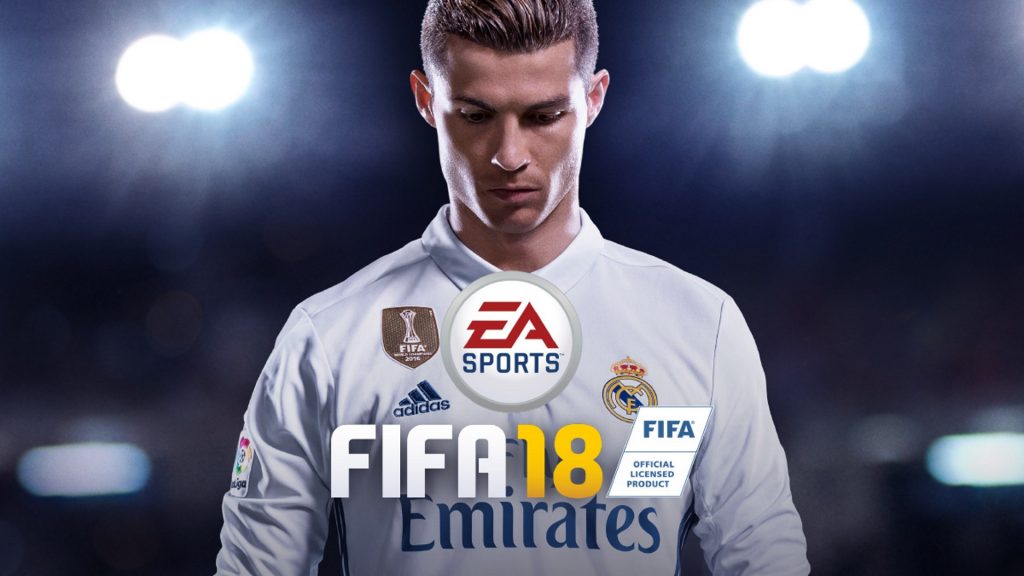 EA Sports have revolutionized sports simulations over the years with their amazingly realistic video games. FIFA is perhaps their best-known venture yet and it’s easily one of the Best Mobile Soccer Game currently available. For those of us who have grown playing FIFA on PCs and Xboxes, there’s a great fix of ultimate penalty thrill – FIFA 18 for smartphones.

Available for both Android and iPhone as well as Windows Phone, FIFA 18 brings the best of graphics, player details and highly customizable shot selection.

There is a separate penalty mode in which you can either practice penalties for endless number of times, or go straight to dying minutes of a match in order to head to penalties.

What you get with FIFA 18 is that familiar feel of being in control, kicking the ball with just the kind of accuracy and power you want, and of course – immaculate placement.

If you are looking for a good soccer penalty game for your smartphone, we are pretty sure FIFA 18 can stand up to your expectation. Just download it and play on – because nothing matches a thrill that tense moments of a penalty shootout bring!

Now get these apps installed and let’s “kick some balls”.

So there you have it—five great mobile soccer games to help pass the time during these quarantine months. Be sure to give them all a try and let us know which one is your favorite in the comments below!